Google Cloud Platform is a suite of public cloud computing services offered by Google. The platform includes a range of hosted services for compute, storage and application development that run on Google hardware. Google Cloud Platform services can be used by software developers, cloud administrators and other enterprise IT professionals.

Avoid excessive use of default service accounts and primitive roles

[1]
, and it allows you to manage access control by defining who (identity) has what access (role) to which resources. Cloud IAM has many predefined roles. Most of these roles provide appropriate access to suit your needs and the most common use cases. Well, not always.

"Primitive roles" like Owner and Editor grant wide-ranging access to all project resources. Your newly launched service now has access to all resources in your project. This is totally safe, right? (No, no it's not).

Always use the minimum required, limit permissions to only those you need:

A basic example of a custom role could look like this:

Additional tip - Searching for the appropriate permissions can often be inconvenient, when working with legacy code. The recommendations engine may be helpful. Using separate accounts, Recommender will check which roles have been used for the last 90 days and propose an appropriate set of permissions.

VPC - Virtual Private Cloud. You can think of a VPC network the same way you'd think of a physical network, except that it is virtualized within Google Cloud. Within a VPC you create and manage typical network resources such as subnets, firewall rules, routes and more.

As with the previous point, when creating a project, GCP generates a default setup, with basic settings and a few firewall rules. Unfortunately, the pre-populated rules in the default network allow for a wide range of insecurities:

These defaults are predictable, permissive, and inflict unnecessary risk towards your environment. For your safety, we suggest deleting these rules and making your own, depending on your needs. Follow the minimum required rule.

Subnets are also created automatically, in each region, with predefined IP ranges. It is neither necessary nor convenient. You don't have to use every region in the world, you don't want to have the same IP ranges in every VPC. Why? If you plan to connect multiple VPC using for example VPC Network Peering or VPN, you may encounter a problem with overlapping IP addresses.

Consider VPC network design early. In many cases, the project grows very quickly and you can forget about such things... Unfortunately, this approach in network configuration causes more problems than you can imagine. Sometimes needed changes will require resource recreation in a different region or an entirely different implementation. It's worth rethinking your network architecture beforehand, there are some good rules for it:

By default, all VMs in GCP are assigned a public IP address and are therefore accessible directly from the internet if there are firewall rules that allows it (such as the default ones). External IP address also allows external communication - access to internet, depending on the environment it is required or not. A safe and convenient approach is to use a NAT gateway, in this case Cloud NAT service. There are several benefits associated with it, especially in production environments:

OK, we have abandoned external IP addresses in favor of the NAT service, but how do we get to communicate with the instance that has no external IP address? In this configuration, we can only use another instance on the same network or VPN connection

Another secure setup proposal is commonly called bastion host - an external endpoint that allows your clients to SSH from the public internet. With this set-up, your application can be safely kept away from public eyes. You can use the bastion in several ways, the most common one is called "Jump server". By using ssh forwarding you can get to the target machine.

[7]
. Remember that you should also secure the bastion's ssh, to avoid trouble - our article about Shell security should prove itself useful here.
[8] 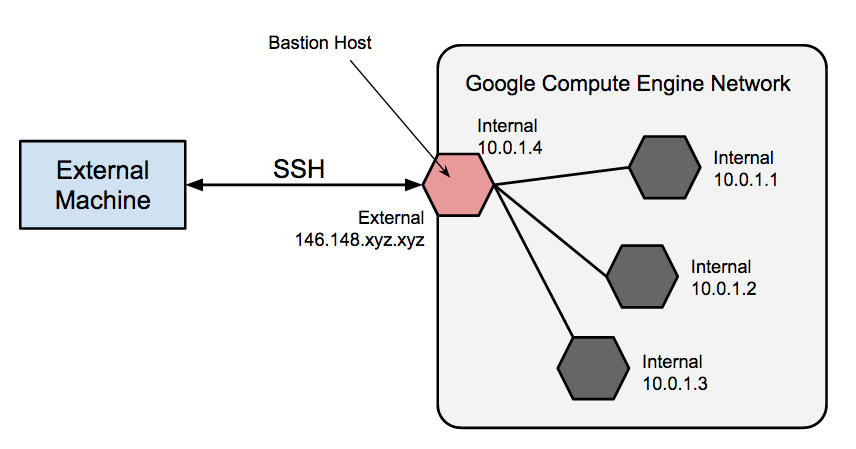 The second approach that is often used, is to set up a VPN server such as OpenVPN/Pritunl on the bastion. This allows the configuration and adaptation of access through these services, for example:

Conclusion - what to do?